When I should be concerned 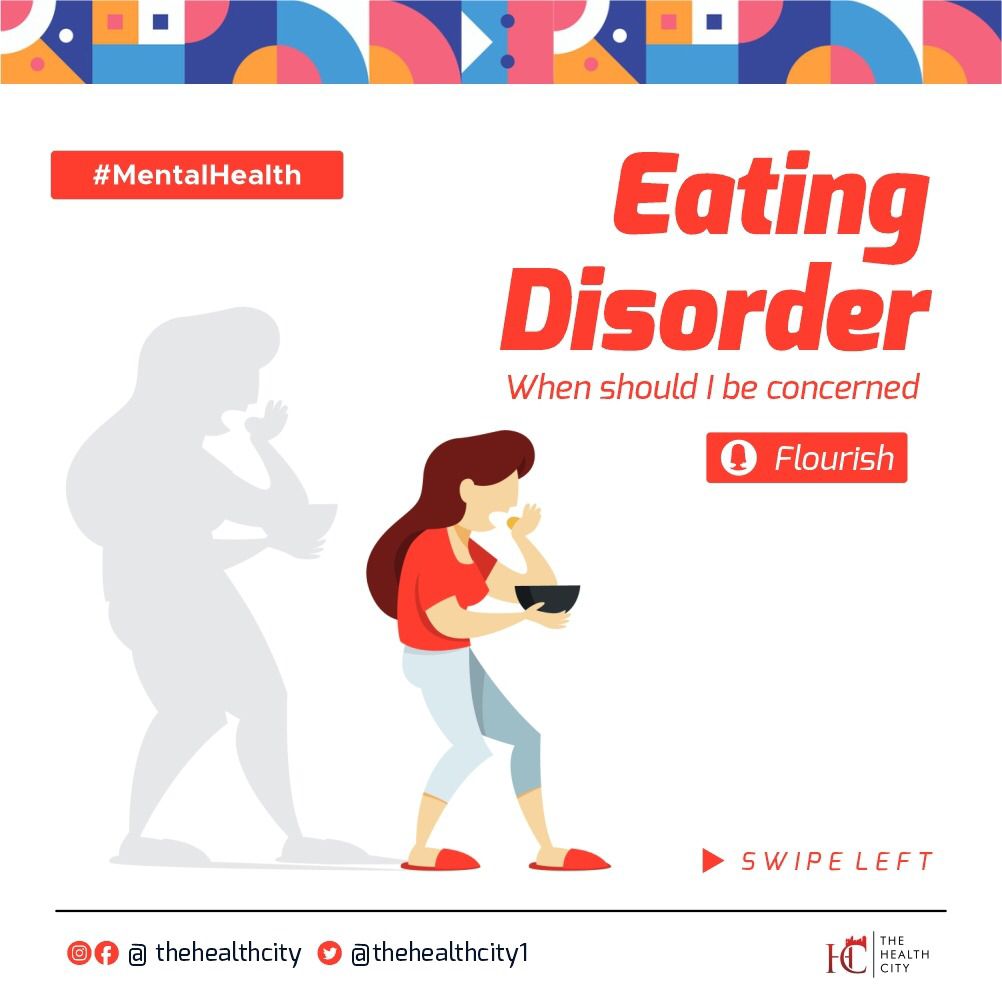 When I should be concerned

Eating is an essential part of human life but it can also potentially become an issue which brings us to eating disorder. There are various types and various forms of eating disorder, one thing about eating disorder is that it is about more than food. Eating disorders are complex mental health conditions that often require intervention of medical and psychological experts to alter their course.

Some individuals have eating disorders but do not know of it.

Some individuals generally view themselves as overweight even if they are underweight, such individuals tend to constantly monitor their weight such that they avoid eating certain types of food or they dangerously limit the amount of food they eat and severely restrict their calories, in some cases individuals may consume large amount of food then go ahead to purge using activities like vomiting,taking laxatives or excessive exercising. Such individuals have an intense fear of gaining weight and are in relentless pursuit of thinness and unwillingness to maintain a healthy weight. This eating disorder is called Anorexia Nervosa. You should be concerned if you start to view yourself in this light because it will start to take a toll on your self-esteem and you will start to limit the amount of food you consume at a drastical rate even to an unhealthy level.

Another type of eating disorder is the Bulimia nervosa,people with this disorder frequently eat large amounts of food within a short period of time, during each binge eating episode search individual feel that they can't stop eating or control how much they eat, this commonly occurs with foods the individual would normally avoid. You should be concerned if you consistently start eating large amount of food till you're painfully full within short periods of time, you then go ahead to purge your food content to relieve gut discomfort.

In other circumstances some people eat large amount of food rapidly in secret until they're uncomfortably full despite not being hungry. They have feelings of distress such as shame, disgust or guilt when thinking about their binge eating behavior, they're often overweight or obese. This eating disorder is the Binge eating disorder.

There is also Rumination disorder - This is the regurgitating of food to either chew it again or to spit it out within the first 30 minutes after a meal. This happens to be a voluntary act and does not bring about irritation for the individual involved and it requires therapy to be altered.

There is also the avoidant restrictive food intake disorder (ARFID). It is an eating disorder that causes individuals to under-eat, this is either due to lack of interest in food or an intense distaste for certain food looks, smell or taste.

In addition to these there are also Other specified feeding and eating disorder (OSFED), under this we can find orthorexia; some individuals have an obsessive focus on healthy eating, such that it disrupts their daily lives. They rarely focus on loosing weight but their self worth, identity, and satisfaction is dependent on how well they comply with their self imposed diet rules.

All these eating disorders are a range of unhealthy eating habits that require medical attention to be altered.

Short Bio:Flourish Eniogo Olujinmi  is a university aspirant. A copywriter,content writer and a creative writer who writes to pass across a message and to keep her readers informed and posted.

Did you know that according to WHO 2.8 million people...

5 Foods to Eat for Healthy Teeth

According to American Dental Association, our teeth and gums are...

Did you know that keeping fit helps your thinking, learning and judgment skills as you age ?