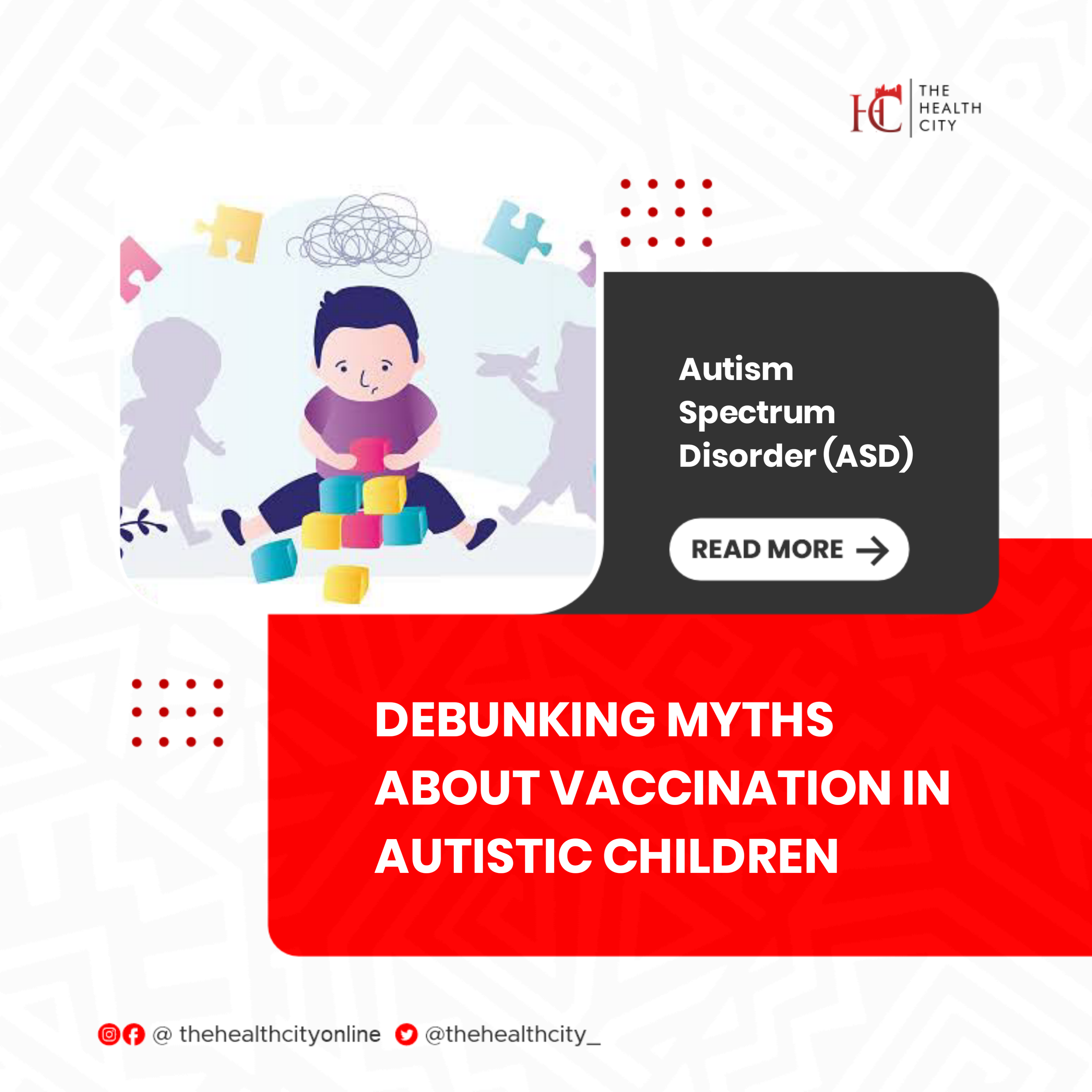 Autism, also known as Autism spectrum disorder (ASD) is a complicated medical condition that’s characterized by problems with communication and behavior, manifestation can range from being a minor problem to a full time disability requiring full time care in a facility or by a care giver .

In fact, vaccines have received more attention and perusal than many other speculated cause of ASD, we will go into some of these beliefs and attempt to invalidate them .

Myth No 1: Vaccines cause Autism

Vaccines seem to have a cause-effect rhythm, that is , if B follows A, then A is probably the cause of B. The vaccines implicated include but are not limited to the vaccine for mumps, measles and rubella disease (MMR). The vaccine is usually given within 12 to 18 months of age, it is also at this age range that children begin to present with the symptoms and signs of autism. Hence it is plausible that if the symptoms of autism follow the vaccination, then the vaccination probably caused the condition. The simplistic explanation that the growing immune system of the child is too weak to handle the effect if the vaccine also seems to add credibility to this notion.

Although the myth continued for about a decade after an article was released in the late 1990s linking autism with the administration of the measles vaccine, the myth was debunked in the year 2005 when it was revealed that the the study was flawed by severe research misconduct, and probably falsified data. The article was retracted and studies revealed that even though the use of the MMR vaccine had reduced, the decrease in the rate of use didn’t correlate with a decreased diagnosis of autism.

Myth No 2 : Vaccine components cause autism

Even though vaccines could not be implicated in the occurrence of autism, it was thought that some components of the vaccines such as the antiseptic thimerosal, an anti-contaminant present in the vaccine vials could also be a cause of autism. In fact, an organization was set up for the investigation of these mercury-based anti contaminants. After series of investigations and observations, no interaction or connections was found between the anti-contaminants and the medical condition. No parallels were drawn between ingested amounts of mercury infested food , and it was noted that even tho thimerosal had been eliminated from the MMR vaccine the incidence of autism increased rather than decreased.

Conclusively, Vaccines remain a very important component of disease prevention and control, and even though a lot of scientific studies have gone into debunking these false truths, the society still has a long way to go to ensure they find and stick to the truth, not only bailout autism but also other medical conditions .

TOPIC: UNDERSTANDING HOW WHAT YOU EAT AFFECT YOUR SEX DRIVE

Having a healthy sex drive is linked to feeling physically...

Can we know you,?I will prefer to be anonymous.How did...

EVERYTHING YOU DIDN'T KNOW ABOUT ADHD

There are a lot of myths about attention deficit hyperactivity...